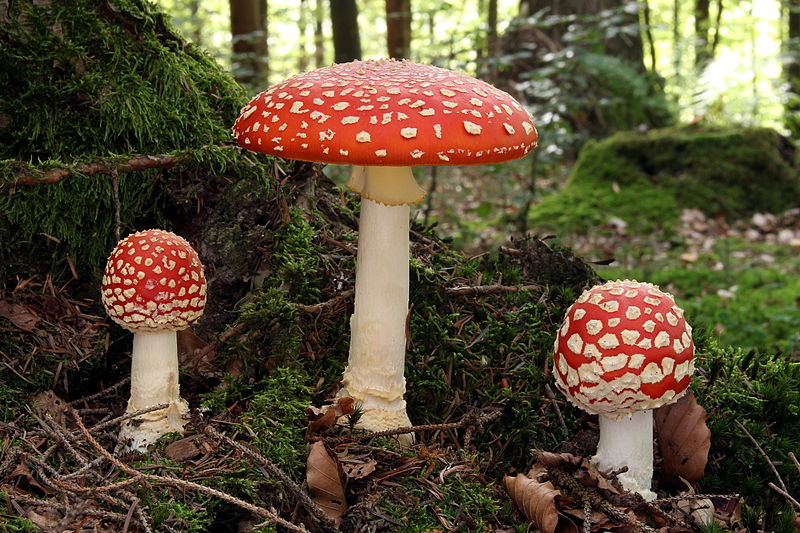 Special Topics in Horticulture: Mushrooms – Amanita muscaria
by Sage Guyon (2020 Pacific Horticulture College student)
Fall is the mushroom season. If you go out for a walk in fall you may notice all of the little toad-stools popping up everywhere. Brown ones, white one, yellow ones, and if you’re lucky you may even see bright red mushroom caps with little white dots.
If you do find a red and white mushroom it’s probably the famous “fly agaric” or Amanita muscaria mushroom. Amanita muscaria, also known as fly agaric or fly amanita and sometimes the Santa mushroom is a curious red and white mushroom. Native to the Northern hemisphere, this mushroom grows in temperate and boreal forests. It is ectomycorrhizal, producing symbiotic relationships with many deciduous and coniferous trees such as birch, oak and pine. The mushroom gives the tree nutrients from the soil in exchange for the tree’s sugar produced by photosynthesis. This symbiotic relationship is vital for the plants and mycorrhizal fungi. A good mycorrhizal network in the soil is a sign of a healthy forest.
The common name fly agaric may refer to its attractiveness to flies. Toads are said to sit on the mushroom caps and eat the flies that fly to it, hence the term toad stood. Another way this mushroom may have gotten its name is from its use as an insecticide back in the day. People would crush up the poisonous mushroom and water their gardens with is to get rid of white flies. This iconic mushroom has been depicted in art and folklore for centuries. It’s often associated with elves, fairies, dwarves and gnomes. These mushrooms can be found growing in “fairy rings” as well as under pine and other trees. To some people the red and white mushrooms found growing under trees resembles presents wrapped under a Christmas tree.
The red and white cap of the fly agaric mushroom also bears a strong resemblance to Santa Claus’s red and white cloak. Some anthropologists even tell stories of Siberian shamans in the remote wilderness that would visit the people in the villages. In the dead of winter the shaman was said to have to climb down the chimneys in order to enter their houses. The shaman would often bring with him his little bag of red and white mushroom caps.
Although poisonous if eaten, Amanita muscaria has been used as an entheogen since ancient times by individuals seeking spiritual development or insight from altered states of consciousness. From Europe to Siberia to North America, this funny little mushroom was prized and sought after by many. Pictures of Amanita muscaria have been found in ancient religious art suggesting it may have been used in religious ceremonies.
Although death from this mushroom is rare there are more poisonous look-alikes and sub-species that can easily be mistaken for fly agaric. This mushroom should only be picked by trained experts. Some experts claim Amanita muscaria isn’t as deadly as most people think and that a person would need to eat about fifteen mushroom caps in order to get a lethal dose. Furthermore most of the poisonous and psychoactive chemicals in the mushroom reside in the cap and at the base of the stem. Not only people enjoy Amanita muscaria but animals do as well. Reindeer (domestic caribou) are quite fond of these mushrooms as well as many other animals.
Evidently this iconic mushroom is steeped in history and folklore. To know this mushroom is to know a little bit more about use and our history. I’m sure we still have more to learn and rediscover about this special fungus.
References:
https://creativemarket.com/infinitumprodux/2204002-Amanita-Muscaria-poisonous-mushroom
https://freshair.photography/collections/flora-and-fauna/products/fly-agaric-fly-amanita-amanita-
muscaria
https://biol421.opened.ca/unknowingly-celebrating-a-mushroom-the-influence-of-the-fly-agaric-on-
modern-yuletide-celebration/
https://en.wikipedia.org/wiki/Amanita_muscaria
https://moofmag.com/2017/12/12/santa-claus-the-magic-mushroom-the-psychedelic-origins-of-
christmas/
https://medium.com/@mustaphahitani/santa-was-a-magic-mushroom-d3065b05e76f
https://sites.google.com/site/amanitamuscariacathy221/letter
Photo: https://biol421.opened.ca/unknowingly-celebrating-a-mushroom-the-influence-of-the-fly-agaric-on-modern-yuletide-celebration/

The Gardens at HCP is hiring: Gardens Assistant