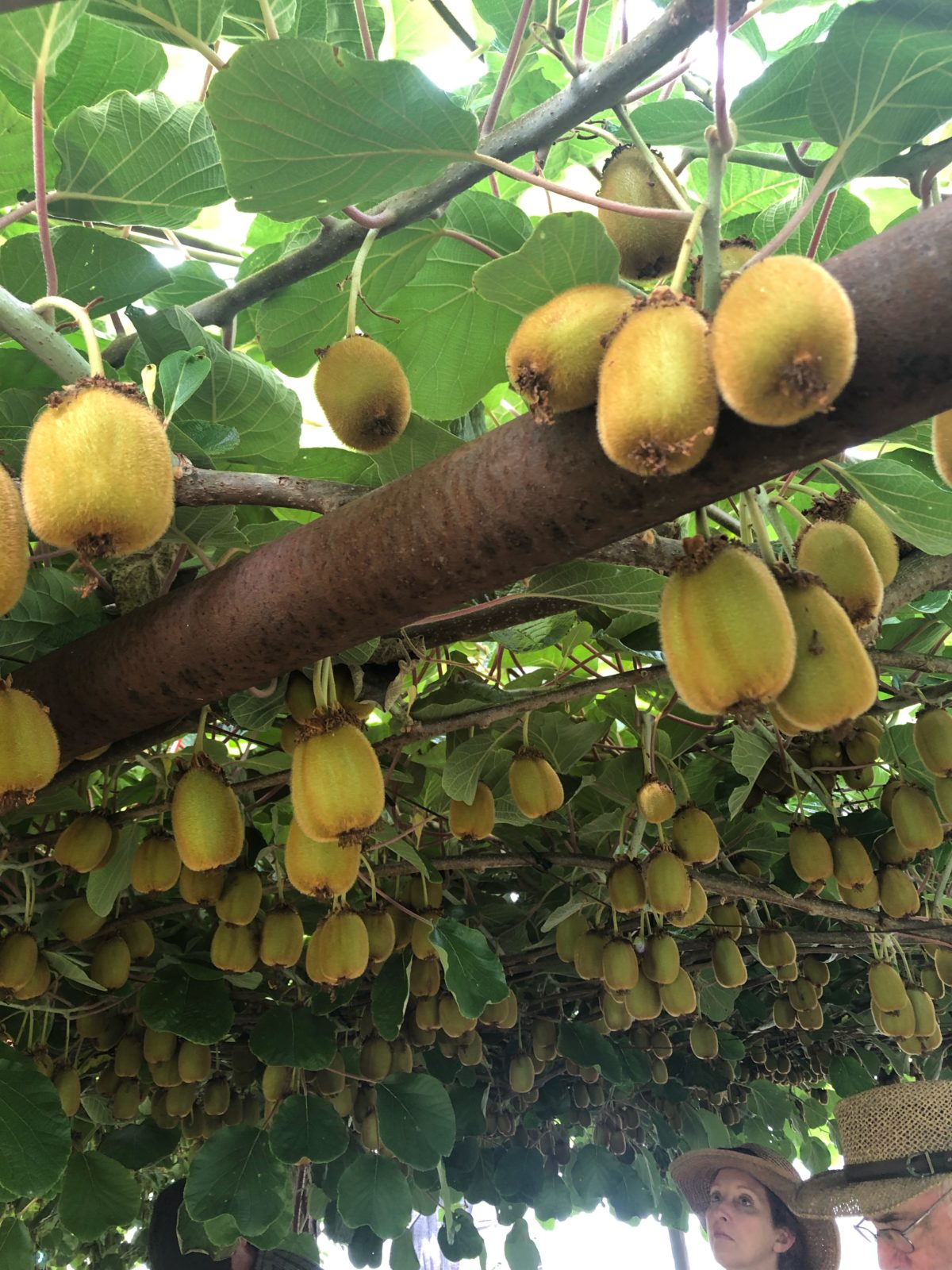 Part 1: By Ian Silbernagel
I won’t lie, when I first saw the list of special topics and discovered that I was assigned to fruit culture, I felt a little let down. Here were all these “interesting topics” like: Medicinal plants! Ethnobotony! Bee Keeping! Important subjects. I must admit, I had overlooked fruit culture as an area of interest. Foolish. Begrudgingly, I accepted my task. On August the 2nd, a Thursday, I slid into class casually, at 9:02 and prepared my ignorant self for a class that would surely be mundane. I couldn’t have been more wrong. A class that would be broken into two parts, a morning full of fascinating information on the culture and propagation of fruit trees, and, an afternoon tour of Fruit Trees and More, an inconspicuous house that somehow hides an insane array of interesting fruit trees and a couple who so clearly understand horticulture that, for the first time in my very short career as plant person, I was awestruck.
Gordon Mackay always presents information with a calm confidence and a clear passion for all things related to horticulture. He also brought us delicious figs, grown by him. After paying his respect to the Coast Salish Peoples and their territory he began to teach us about the different types of grafting and training methods utilized today in fruit production.

What is grafting? It is essentially frankensteining two plants together to form a single plant, combining their powers like Voltron, only it’s real and not an obscure 80’s cartoon. Grafting requires rootstock and a scion(a young shoot of a plant) that are compatible to create vascular continuity and be successful. There are a number of reasons to do this, namely to increase disease resistance, cultivar retention, adaptability, repair and general ease of propagation. Rootstock is usually selected for it’s mature size and ability to pass on disease resistance to the scion. There are a number of grafting methods including t-budding, chip budding, whip graft, whip and tongue graft, wedge graft, saddle graft, cleft graft and side graft etc. There is a definite art in grafting and creating a smooth transition from rootstock to scion.
We also discussed the Tall Spindle Planting System, the Vertical Axis System and the Upright Fruiting Offshoot System (U.F.O! yeah…real mundane Ian). The Tall Spindle Planting System was designed to maximize yield and quality while being space efficient. It utilizes fully dwarfing rootstock, high density planting and highly feathered nursery trees. It requires minimal pruning at planting and is considered the most profitable training method. The Vertical Axis system has us train trees into a pyramidal shape with a dominant central leader to maximize light penetration. In the U.F.O. system, the trees are planted on an 45-60° angle and every branch is treated like an individual tree. I had no idea fruit production was this technical. My hat is off to those who have mastered these techniques.
For the second part of our day we ventured off to Fruit Trees and More in Sidney, BC. which is owned and operated by Bob and Verna Duncan who have over 45 years of experience growing fruit trees on the west coast. You would never know by driving by their house that behind it resides an incredibly diverse fruit orchard. Walking up the driveway to meet Bob you notice a few fig trees to your left and then he casually tells you that he has 150 varieties on site. Excuse me? Rounding the corner you come face to face with a lemon tree. That’s right, a lemon tree. Where am I? Oh yeah, in Canada.
Bob goes on to explain to us how acidic citrus is actually quite hardy, down to -3°. He even has a special technique for dealing with those rare times when we go below -3° that involves Reemay fabric and Christmas lights. Mind blown. Rounding the next corner he shows us a 20-30’ olive tree that is climbing up the side of his house. What is this sorcery? We haven’t even made it into the back yard yet. Walking into the back yard you notice the labyrinth of greenhouses all modified to suit their particular purpose. The first greenhouse we enter has oranges in it, obviously. Next we find ourselves under an arbour covered in kiwis.
Throughout the rest of the tour we see guavas, apricots, pawpaws, almonds, limes, loquats, peaches, nectarines, pomegranate, oh and apples. All of the above artfully tucked into a seemingly small place, diligently implemented and expertly articulated by Bob and Verna. They also sell jam, so naturally I purchased the bearss lime marmalade which, as they warned, packs a punch.
With my perception of the world completely flipped on its head, I left with marmalade in hand, humbled. The moral of the story is to never judge a book by it’s cover.

Last week the students at the Horticulture Center of the Pacific were greeted with a visit from Gordon Mackay and a lesson in grafting and training methods for fruit trees. Before learning more about grafting, I found myself questioning why it was a foregone conclusion that if you were planning on having a tree bear fruit, it most likely needs to be grafted. In coming to know more, I understood that above all, grafting is a safety-net. As a reliable procedure, grafting with a scion and rootstock will almost always give the expected results of what the plant will be, and what kind of fruit it will bare. On the other hand, growing from seed is a risky game.
First documented by well renowned poet, Virgil, in his epic The Georgics, grafting can be dated back to before the first century. It filled the same role then as it does today, with experts even grafting four or more cultivars on one rootstock on apple trees for example, thus getting a variety of fruit on a single tree.
However, the art of grafting is not cut and dry, and grafting four different scions on a single rootstock requires skill, practice and technique. The main reason why  grafts work well is due to the contact established between the vascular cambium of the rootstock and the scion. This particular region is full of layers of undifferentiated cells, actively dividing and creating a bridge of solid vascular tissue between the two pieces. It should be noted though, that for this to work the species of the rootstock and scion must be the same or at least closely related.
Grafting is used because the cultivar retention for fruit is low, meaning many fruits do not have true seeds. The ways to graft are many. Approaches like Chip budding involves cutting a hole underneath a bud to create a heal, and mimicking that same spacing in the rootstock to attach the two together and with a grafting tape to solidify the connection.  Another common method is the saddle graft that is applied when the rootstock and scion are at a relatively solid width. The last method can be used along with a trick called “church windowing”, where you leave some of the cut cambium exposed above the rootstock to form a callus and create a much stronger grafting point.
Now there are many other ways that grafting can stretch the limit of reason. We were shown an instance of that when we were invited on a tour of Bob and his wife Verna’s orchard, Fruit Trees and More located in North Saanich, where they have been growing fruit trees for over 45 years on the west coast. Unlike most orchards, Bob and Verna specialize in growing Mediterranean fruit in our colder climate by manipulating the conditions by creating micro climates, grafting on hardier rootstock, and experimenting with different training systems. One of these systems is a new method called “Upright Fruiting Offshoot” or “UFO”, developed by Dr. Matt Whiting in 2010, trees are planted on a 45 to 60 degree angle, and the trunk is laid horizontally along a lower trellis wire. All but some well placed buds on the upper side of the trunk are removed and as they produce upright shoots, each one is treated as its own tree. On each of the upright branches, fruiting spurs are produced, forming what would in 2 years become a wall of fruit.
Overall, the early day spent with Gordon learning about grafting theory and techniques, and then seeing this come into play when visiting Bob has illustrated the huge spectrum and economic value grafting can bring. Having Bob impart some of his niche methods of grafting, where he has spent 45 years growing and testing over 500 different varieties of trees illustrates the potential that this field has. Many of the students walked away excited, with newly inspired thoughts of what they can do next in the realm of horticulture.