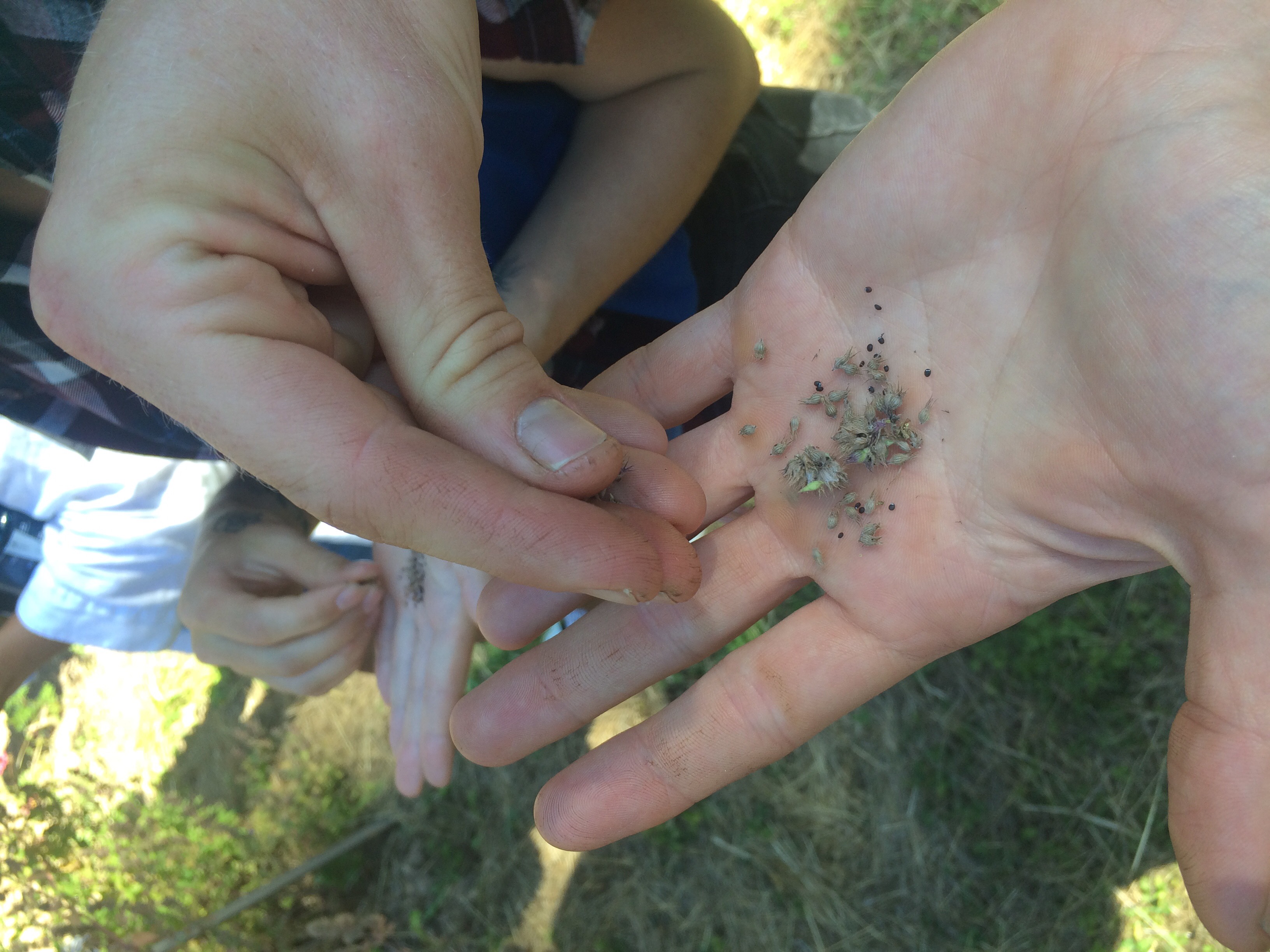 A Pacific Horticulture College Student Blog Post
by: Chris Head
This August, our horticulture class visited Salt Spring Island where we toured Salt Springs Seeds and listened and learned from long-time seed grower Dan Jason. Our deep thanks to the Hardy Plant Borders Group for their generous donation to make this happen and to the Pacific Horticulture College administration for organizing the whirlwind tour of this Island, with its long history of agriculture, producing heriloom apples, vegetable seeds, and other legacy plant genetics. Salt Spring Island is also the home of the Seed and Plant Sanctuary for Canada (seedsanctuary.com), “dedicated to the health and vitality of the earth through the preservation and promotion of heritage seeds.” I was delighted that Salt Spring Seeds was my first practicum for the horticulture course.
Saving seed is older than history. Humans, as well as birds in the Corvidae family such as ravens, and likely other animals well, have always saved seed. Originally a cache of food, many soon noticed that germinating seeds could grow to produce abundant seeds for future harvests. Many of the very foods we eat – kernels of corn, beans, and quinoa ‘grains’ (not, in fact, grains) – are the very seeds themselves. When my classmates and I planted our Three Sisters project in the urban garden it was amusing to some of us that it was literally a kernel of corn. With little maintenance, the bed now overflows with corn, squash, and a few beans. No wonder the Three Sisters fed whole civilizations for millenia!
Dan Jason writes in his book Saving Seeds: As if our lives depended on it:
“What you basically do when you save seeds is this: you go to the seeds when they are ready and get them; you make sure they’re really dry, and then you store them. It’s as simple as that but…”
Each plant has a unique life cycle. For example, chard is in fact a biennial, and produces in its second year, well past the time it is typically harvested. Most of our crops are treated as annuals, even if they are biennials like chard or perennials like tomato. The plant can look completely different in seed, like a candelabra-shaped lettuce plant bolting to the sky and producing its fluffy dandelion-like seeds which carry on the wind. Beans are a whole lot of fun. We spent a day at Ruckle Farm picking rows of bean plants with a delightful assortment of people, all sitting in a circle, removing plants and pods, laughing and chatting the whole time. It felt primal. If they rattled and looked dry and yellow, they were ready to go. Getting them out of the pod was the fun part – the threshing. Back at the farm, after drying in the low-humidity greenhouse, Dan had us step and scrape (dance!) on a wooding threshing box. It was so much fun but I wondered: wouldn’t we damage the bean seeds!? By the time they dry, the bean is so hard, that there is no damage, just chaff. Dan powered up the air compressor and with a sweeping motion blew away all the chaff from the threshing, leaving beautiful legumes for packing, or eating. We laid them out on screens to dry another couple days before packaging.
Storage of seeds is best in cool, dry, dark conditions, labeled and dated. It’s easy for seeds to get mixed up, as happened one time to Dan when a raven jumbled the seeds he was about to plant one year. Who knows: maybe it produced another variety. There is such variety! One of the tragedies of big agribusiness, and of seed becoming a patented activity, is that we have lost so much of the variety and diversity of foods. At Salt Spring Seeds there were dozens of legume varieties, including purple peas, swirly and speckled beans, some, like Tanya’s, wrapped in a stunning pink bean pod, which was a happenstance cross discovered by a former intern. The benefit to having a diverse seed supply and saving your own seed are many. Anyone can do it! You can create new varieties or determine the best one for your specific microclimate. In a world where seed stock is becoming consolidated and owned by large corporations, like Monsanto, who takes farmers to court for saving their own seed, seed saving can be a means of ensuring food security and taking back power and control of a basic human and ecological right: the right to eat and grow our own food.

Join us on May 21st for tomato day! We will be sel

Garden Friends – A Series for Children and a Par

Community Education, Wellness, and You
Scroll to top