The class of 2022 had the great opportunity to learn about grafting from Gordon McKay. We learned all about how grafting is the horticulture technique of fusing plant (often tree) tissues together to propagate a new plant or cultivar. It is a successful asexual method of reproducing a plant where the upper section of the graft, which is called the scion is attached to the lower portion which is referred to as the rootstock.

We learned all about the common reasons for grafting like to increase crop yield and variety, cloning hard to propagate plants, preserving the genetics of species, encouraging earlier flowering, repairing damaged trees, and creating unique plant forms such as weeping and standardized. We focused on the most common reason commercial producers graft which is to obtain the benefits of the rootstock species with the visual appeal of the chosen scion. The rootstock could contain natural disease resistance to a common pest for the scion. For example, some Malus rootstock show natural resistance to wooly aphids, or how the rootstock of Juglans nigra (Black Walnut) naturally resists Armillaria mellea (Shoestring root rot). Grafting can also enable plants to grow in more challenging environments such as drought-tolerant Vitis rootstocks or how the rootstock of Rosa laxa is more tolerant of alkaline soils than most.

It was easy to realize how important pest and disease-resistant rootstocks are in fruit production, and how grafting can be utilized to greatly increase fruit yield. Grafting gives fruit producers the unique ability to grow a variety of the same fruit on the same tree and can create single fruit trees with 3-4 different varieties on one. The class had the opportunity to try some hands-on grafting using Cornus, Salix, and Acer branches. We carefully practiced our saddle, wedge, whip, and chip bud grafting which was much more fun than many of us expected. We learned about the many different techniques that can be used in the grafting process; each is useful for certain plants and conditions. The following examples are just a few of the wide variety of different grafting techniques that exist: 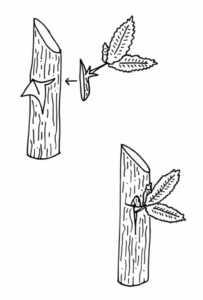 T Budding
Season: Mid to late summer
Plant: Roses and fruit trees
Effect: Graft a single bud instead of an entire scion Start by cutting away a
healthy bud and a strip of bark approximately 2.5 cm long from the donor plant.
Then, cut a T-shape into the bark of the recipient plant and insert the bud into the
flaps of the T. Finally, close the flaps over the bud and secure them to hold the
bud in place. 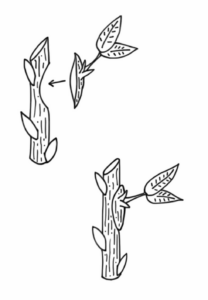 Chip Budding
Season: Mid summer to early autumn
Plant: Fruit trees, deciduous trees, and ornamental trees
Effect: Graft a single bud instead of an entire scion Begin by removing the bud, then
make a cut below the bud at 30 degrees. Make another cut above the bud that travels
behind the bud and connects with the first cut; this will remove the bud from the
donor plant. Make a corresponding cut in the recipient plant and insert the bud
cutting into the slot. If possible, try to match the cambiums of the “chip” and those
of the recipient. The chip should then be secured and allowed to heal. 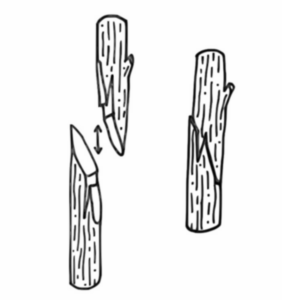 Whip and Tongue Grafting
Season: Late winter to early spring
Plant: Fruit trees
Effect: Attach a scion to a rootstock or branch Make a slanted cut through
the wood of the scion; make sure the cut is smooth and flat. Make a second
cut downwards into the scion wood, approximately halfway down the oval of
the first cut. The depth of this cut should be around the depth of the knife
blade. Make 2 matching cuts in the wood of the recipient plant. These cuts
should then be slid together, interlocking. Secure the cut with grafting tape. 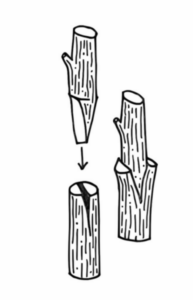 Wedge Grafting
Season: Late winter to early spring
Plant: Specialty ornamentals, fruit trees, or to produce weeping or multi-stemmed plants
Effect: Used when the recipient rootstock is larger than the scion being attached Make a
horizontal cut along the root stock, followed by a vertical cut down the center of the
scion. The depth of the vertical cut should be no deeper than the cutting blade is wide.
Next, sharpen the end of the scion into a wedge shape and insert it into the vertical cut.
This can be done with more than one scion if they are small, or if the intention is to
create multi-stemmed or weeping trees. Use grafting tape to secure the graft.

All drawings by Bethany Couture.

We are Hiring a Garden Assistant