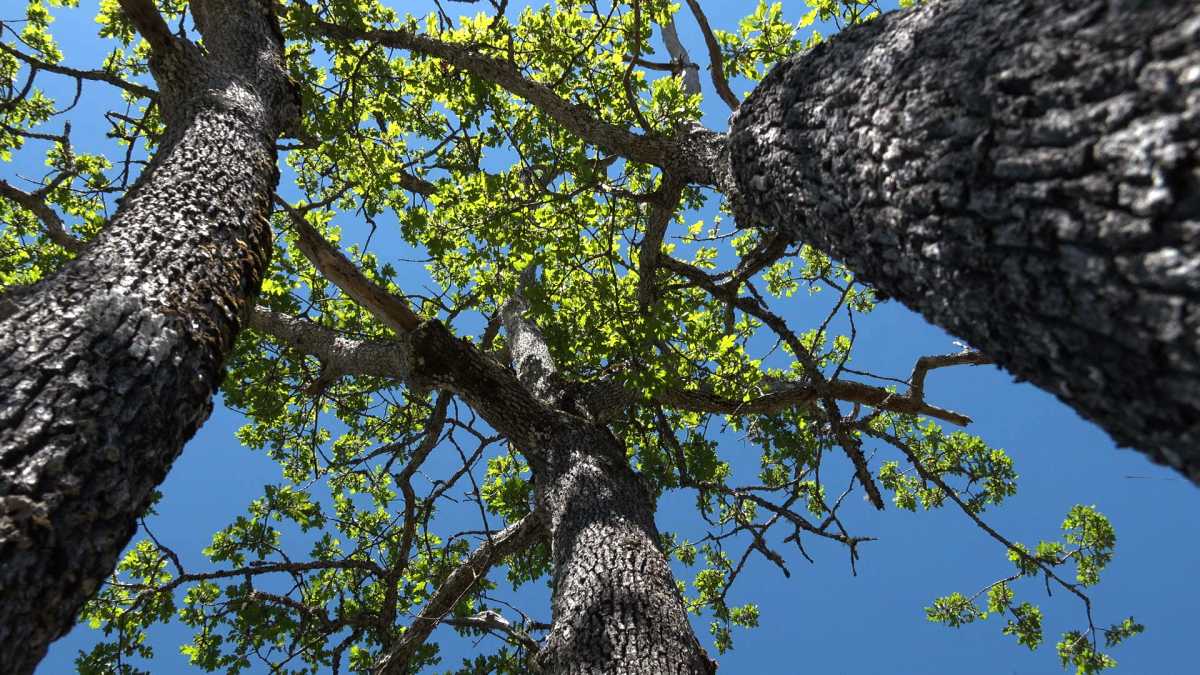 Our morning Special Topics in Horticulture class was on Environmental Stewardship with Kristen Miskelly from Saanich Native Plants located at Haliburton farm. Saanich Native Plants is a nursery that specializes in the over 200 species of plants found in southern Vancouver island, and aims to conserve global biodiversity by preserving our local biodiversity. Saanich Native Plants practices no tillage, and doesn’t use pesticides, herbicides or fertilizers. As the plants they grow are native to our environment and used to the summer drought, they are even able to use no watering. There is also a wetland section on the property. While they consult on many sites, their focus in purely in native plants with a focus on Garry oak ecosystem restoration. They work throughout the eco region and have even done restoration projects at Helliwell Provincial Park on Hornby Island.
The Garry oak is only located in the Pacific Northwest and in Canada is only found in British Columbia. Together with the Arbutus tree, it forms a savannah ecosystem filled with wild flowers including the Camas flower, who’s bulb was a staple food of the First Nations of the Pacific Northwest and was sustainably managed for thousands of years through intensive controlled burns amended with seaweed to enrich the soil. However, sadly all three are endangered due to development of the land.

The majority of Garry oaks are located in shallow soil sites with lower nutrition and moisture like hilly areas or mountains, which leads to smaller trees than are found in deep soil locations where the savannah truly thrives. These sites have been reduced to less than five percent of their original size at the time of European contact. While there are fines in place to protect the trees, they should be re-evaluated to fully appreciate the rarity of the tree. Our society gives monetary value to things based on their scarcity, and undisturbed deep soil Garry oak savannahs are not only rare but irreplaceable. Diamonds and gold can be mined and valuable art works created but our Garry oak savannahs are a gift that can’t be replaced. In the Comox Valley, the fine for cutting down a Garry oak is slightly under $10,000 dollars; however, the profit from development the land for a condominium greatly exceeds the losses from the fines. However, if we compare how many apartments there are to undisturbed Garry oak savannahs, the savannahs should be truly priceless.

Despite the damages to the ecosystem there is a great potential for restoration. Beacon Hill Park was so rich with Camas flower meadows that they were mistaken for lakes by Juan de Fuca when he saw them from his ship. These meadows continued to bloom even in the 1950’s, however these areas are largely grass now and walked over too often for the flowers to bloom and their foliage makes them easily confused for grass. Fortunately, these bulbs can exist for a hundred years so protecting them from foot traffic would allow for a great natural restoration to the park. When restoring meadows, Saanich Native Plants uses a variety of wildflower seed mixes to increase the biodiversity and allow the soil to choose which plants thrive.
Kristen mentioned that we are given the choice to make our impact on the earth detrimental or beneficial: our impact can be destructive like open pit mining or as beautiful as the Butchart Gardens, which itself was once a mine. In some Eastern mythologies the world is seen as a lotus flower, so we are given the choice of being a garden pest or acting as beneficial organisms protecting and allowing it to reach its full potential. As we try to make the change toward a more beneficial impact the best source would be from the indigenous peoples who lived in a sustainable manner for thousands of years within the ecosystem.

In the afternoon, we experienced a very life-changing Special Topic in Horticulture class on Ethnobotany. Ethnobotany is the study of culture and plants diving deep into the relationship between people and plants and how they interact and use them in their everyday lives. At the HCP, there is a wonderful W̱SÁNEĆ Ethnobotany Trail that highlights many native plants that are from this incredible land we live, study and work on every day. Judith Arney and Elder Earl Claxton Jr. came to the gardens to teach us more about Ethnobotany as well as tell us some stories and knowledge into the native plants here at the W̱SÁNEĆ Ethnobotany Trail.

On the trail, you will find some very well-done signs that give more knowledge about the plants you are looking at and are easy to find. Plants have many different uses from food, materials, and medicine but also have an important impact on culture. These plants have significant importance to the W̱SÁNEĆ people and are very important for the natural environment and wildlife. The trail allows one to discover W̱SÁNEĆ culture, with a growing appreciation of the native plants around you and realizing the need for these plants in more gardens and further revive these areas around us and be stewards of nature.

Some more info about native plants:
Ocean Spray (Holodiscus discolor) (KÁȾEȽĆ): When in full bloom the W̱SÁNEĆ people knew it was the best time to start fishing for Sockeye Salmon. The stems grow quite straight and once heated become hard, which is sometimes called “ironwood”. The W̱SÁNEĆ people used it for making bows, arrows, camas-bulb digging sticks, harpoon shafts, barbeque sticks, knitting needles, and other tools.
Sword Fern (Polystichum munitum) (SŦXÁLEM): The W̱SÁNEĆ people used Sword ferns to wrap around and carry salmon. In spring the rhizomes were sometimes dug up, cleaned, and cooked in open fires. The cooked rhizomes were peeled and eaten, usually with seal, bear grease, or salmon eggs.
Pacific Willow (Salix lasiandra)(SXELE,ILÓ): Common around damp areas in the W̱SÁNEĆ land, and a very important plant for the W̱SÁNEĆ people as they would use the inner bark of willow trees to make reef nets, Dunegrass leaves were used to tie around the leaders of the nets. Willow bark was also used to make fishing lines and used in basket decoration.
Nootka Rose (Rosa nutkana) (ḴELḴ): Wild Rose, often tucked in with some other species such as Snowberry and June Plum. The flowers are quite beautiful and bloom from May to July, they then turn into rose hips in early fall which are eaten raw or dried or they are boiled into tea. Never eat the seed inside the hips as they are covered in hairs that can be quite irritable.
Photo credit: http://vancouverislandtreestories.ca/tree-stories/garry-oak/

Garden of the Month: August 2021
Scroll to top