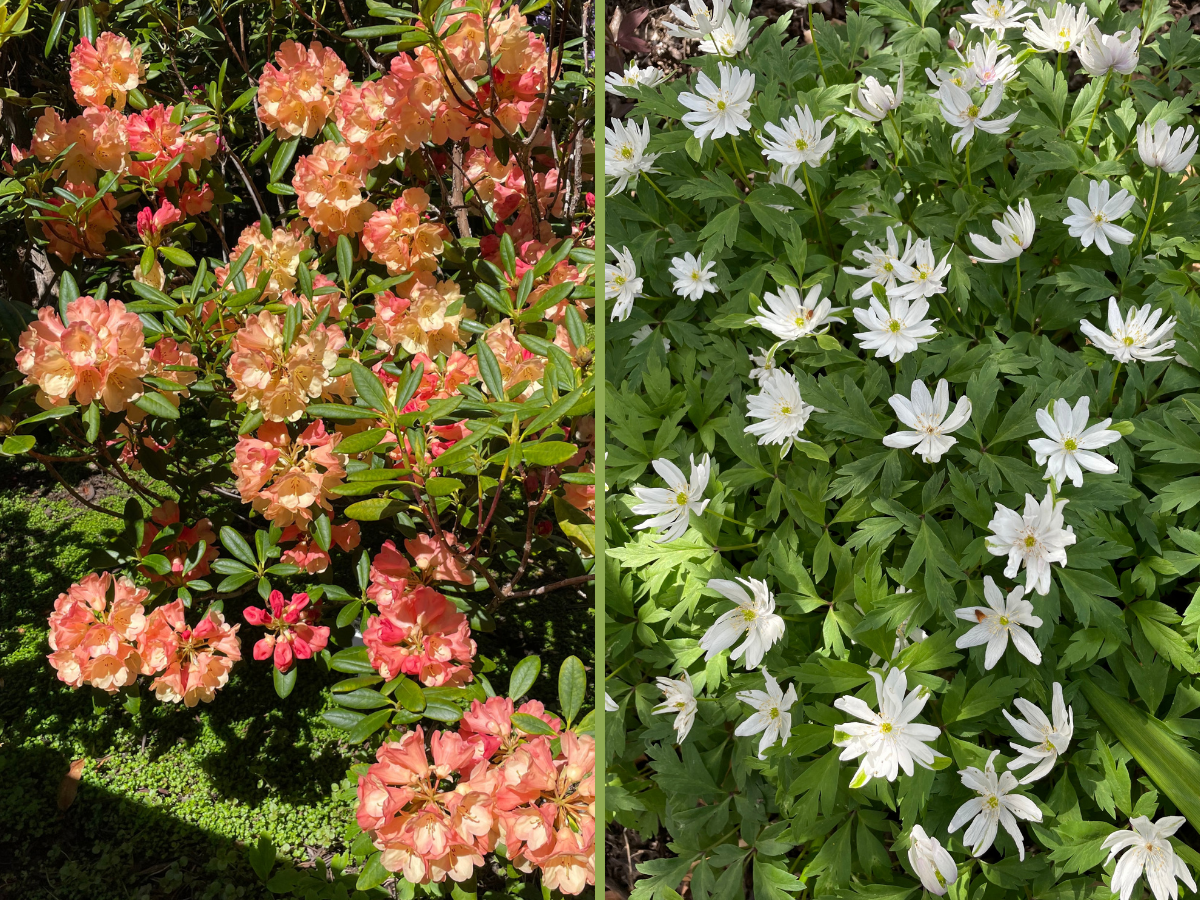 Pictured: Rhododendron ‘Seaview Sunset’ (left) and Anenome nemorosa
The beginning of May, the real start of summer and so many different plants are coming into bloom.
Apple trees (Malus domestica) are covered in flowers and now the miracle occurs – when insects of many sorts flit and fly from flower to flower searching for sweet nectar but inadvertently carrying pollen from one bloom to the next. Without those myriad insects we would never get apples at all – what a debt of gratitude we owe them and it is a permanent reminder of our need to stop using pesticides.
Mexican orange (Choisya ternata) is also now in flower but most spectacular of all are the rhododendrons. Every day another colour bursts out in the Rhodo Garden – pinks, yellows, reds and lilacs, whites, crimsons and oranges. How can a single genus display so many different colours? On large trees and small bushes, with both massive blooms and small ones. I have been captivated gazing at the varied colours and spotted markings of some of the varieties. Rhododendron ‘Seaview Sunset’ is a mixture of dusky pink and pale yellow, R. ‘Golden Witt’ has pure yellow flowers but with deep red spots on the lower petals. And R. ‘Mrs. Betty Robertson’ is creamy pink with crimson markings. Don’t miss this moment to come and enjoy them.
This too is the time for Trilliums and Solomon’s Seal (Polygonatum). As you walk down the main path to the rhododendrons they are to be seen particularly in the Fusion Garden to your right and there is quite an array of trilliums, flower colours varying from deep red to bicoloured pink and white. Flowering currants (Ribes) too are now at their best with their dangling flowers in pinks, reds and whites.
Something that has stimulated me to do a little research is the seasonal appearance of a carpet of anemones in the Winter Garden and Takata Garden. Above a mat of finely cut foliage are carried little white star-like flowers and, having seen them all across Canada, I had instantly named them Anemone canadensis, the Canada anemone. But on looking them up and speaking with Linda I discover I am wrong. The native anemone has five petals while all those in the gardens have seven or more. It turns out therefore that they are actually Anemone nemorosa, the European wood anemone, and we are fortunate to have a number of different varieties thanks to the generosity of a past member. There are simple seven-petalled ones but also patches of doubles, a faintly blue-tinged variety, A. nemorosa ‘Robinsoniana’, and in the Takata Garden a vivid pink one. We even have a smaller yellow one which it turns out is another species altogether, Anemonoides ranunculoides. We live and learn.