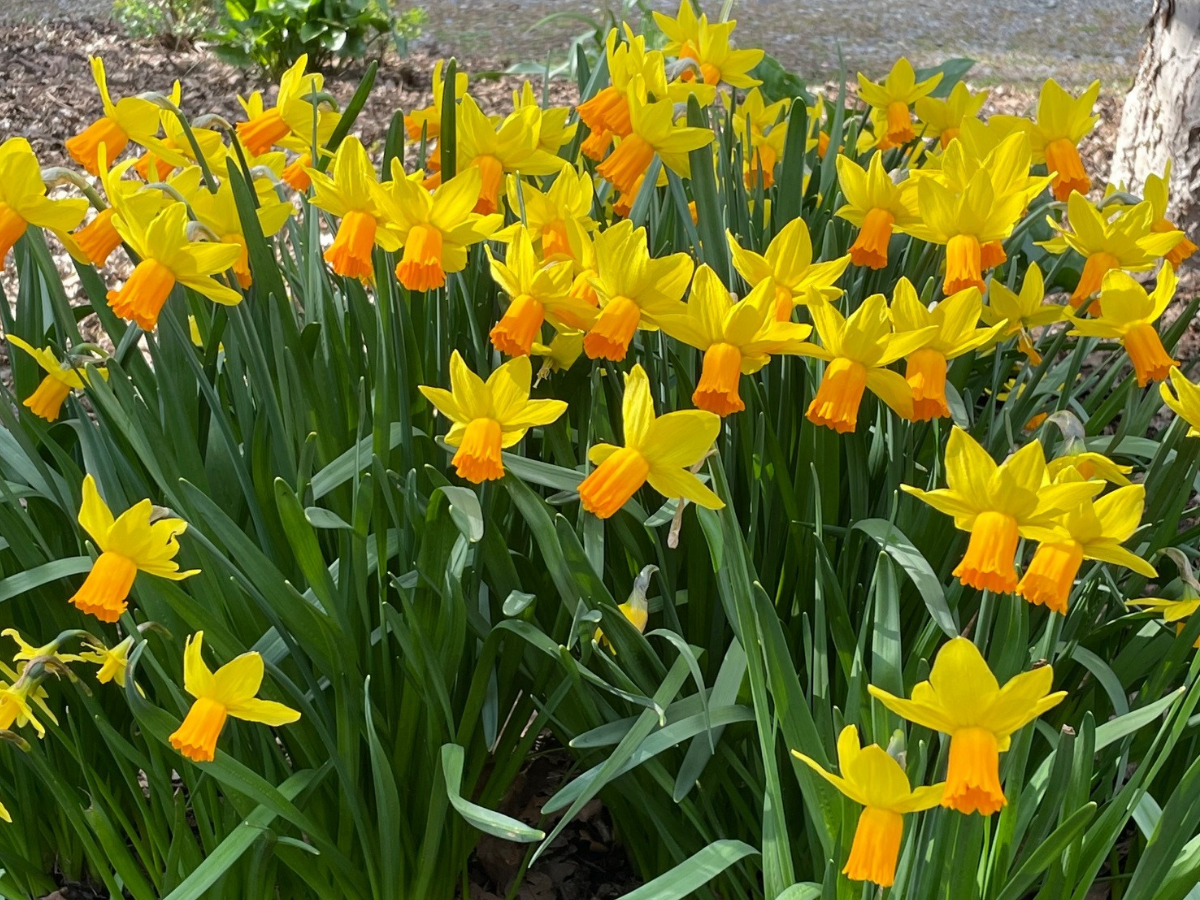 Despite some persistently frosty mornings and one or two rain showers, this moment of the year is surely one of the most marvellous and stimulating, especially for gardeners. It feels almost like standing on the lip of a volcano about to erupt. You can feel the rumbles and hisses of nature as the power of green growth gathers itself to burst forth. And all over the Gardens there are plants bubbling up, daffodils here, hellebores there, primulas in all sorts of colours splashing out over the beds.
For me daffodils (Narcissus) signal the real arrival of spring and the lower field is starting to turn yellow as the buds open. Patches of different varieties are appearing everywhere. In the Edible Beds beside the Plant Sale Area an attractive shorter variety, Narcissus ‘Jetfire’, has darker orangey trumpets that bring out sharply the acid yellow of the petals. Just across the path in the Winter Garden Narcissus ‘February Gold’ is a taller and more traditional golden yellow colour. Each has qualities to admire but I do have a fondness for the miniatures; I tend to call all of these jonquils but I should be careful. To be more technically precise Narcissus jonquilla is a separate dwarf species with origins in Spain and Portugal.
Pulmonaria (Lungwort) is another plant flowering now in several gardens. A great plant for ground cover in shady areas, flowers can be pink, red, purple, blue or white and many varieties with blue flowers start out pink as the buds open. If I’m not mistaken the name derives originally from the spotted markings on the leaves that were thought to resemble the patterns of bronchi in the lungs.
Walking down the main path to the Takata Garden you can now enjoy the heavenly perfume of Daphne odora whose buds are opening. I cannot put my finger on it precisely but the fragrance reminds me a little of fresh pineapple with a hint of rose water. Rhododendrons are just beginning to open and of the early ones Rhododendron ‘Bo-Peep’ is a lovely low-growing pale yellow, R. openshawianum is a much bigger tree whose flowers are pale pink and R. ‘Lucy-Lou’ is pure white.
If you stand on the moon bridge and look upstream two tall Prunus ‘Accolade’ above the pond are spreading a delightful cloud of pale pink blossoms; turning the other way the Edgeworthia chrysantha beside the stream is full of its unusual white and yellow flowers.
Bulbs that particularly catch the eye now are blue scillas and grape hyacinths (Muscari), windflowers (Anemone blanda) in several colours and tulips are also starting to open. There are so many plants I would like to mention but that is surely the best sign of spring, an excess of colour and beauty.