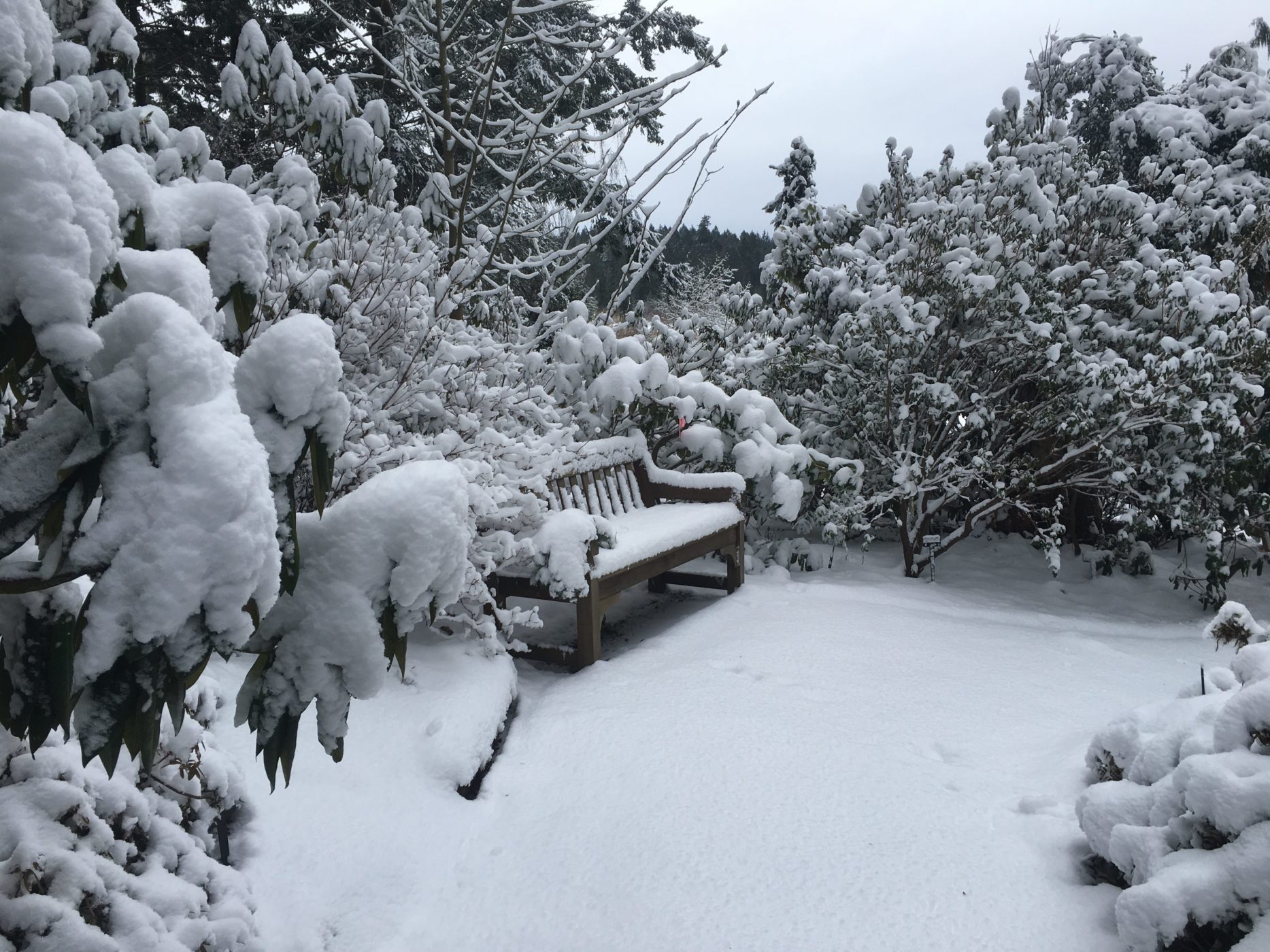 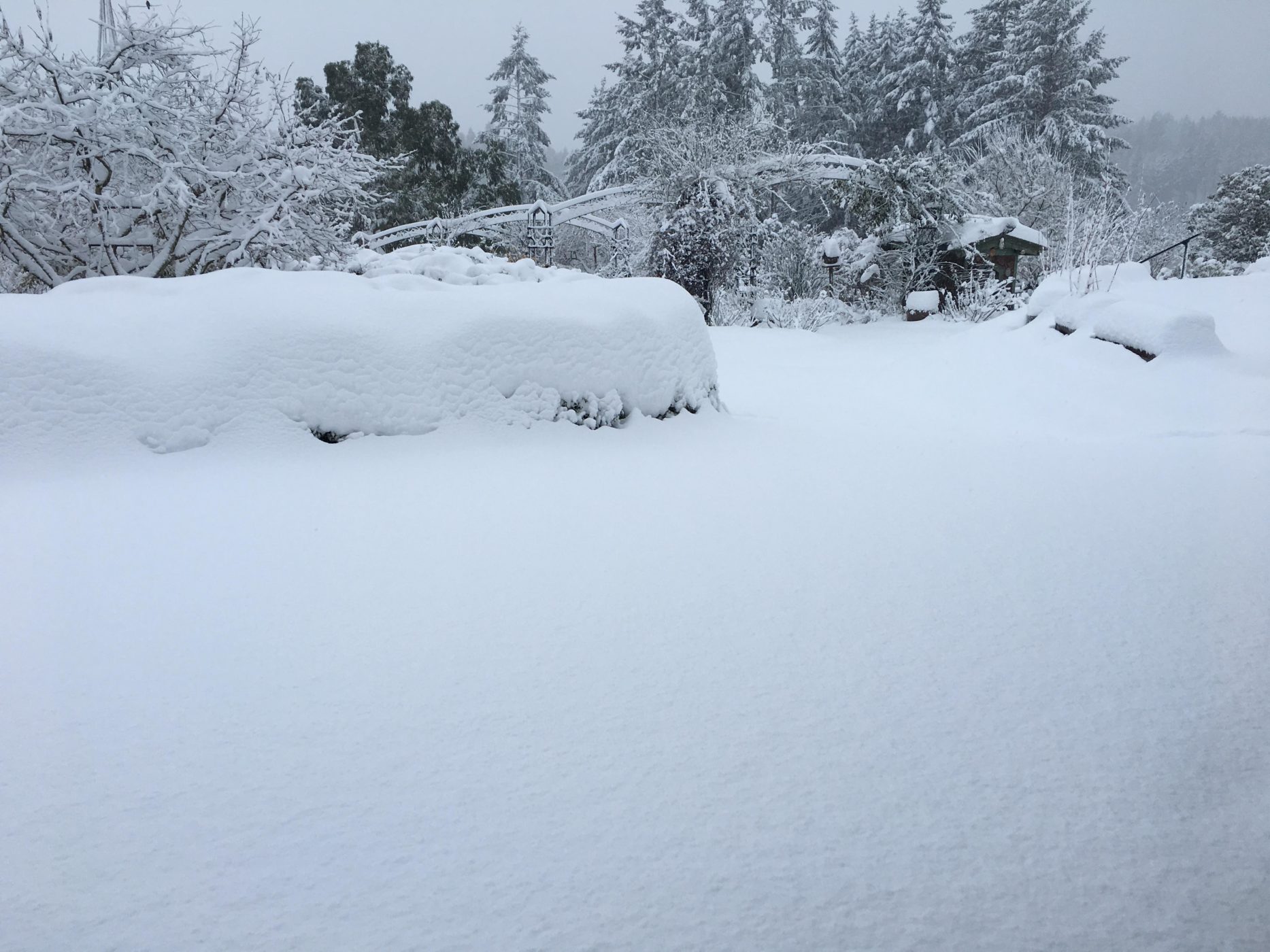 Now that Spring has arrived, it is hard to imagine that it was only a month ago when Vancouver Island was covered by a blanket of snow! We asked a few members of the HCP staff and volunteer team how the Gardens at HCP is recovering from the recent storm.
Jane Tice, the Practical Skills Instructor from our Pacific Horticulture College said, “On my first visit I walked down to the winter garden and I have to say it looked pretty bad. I wanted to cry when I saw the witch hazel grove – the shrubs took a direct hit from a very large branch, but the students did a great job cutting out the damage and it wasn’t as bad as it initially looked.

I have to say the most important thing to not do is walk into a garden when you can’t see what you might be stepping on and to wait, whenever possible, for the snow to melt naturally. We often do more damage trying to remove it. We did have to spend a morning in the Fuchsia Garden tying the yews back together. They had splayed right open with the weight of the snow, something that yew tend to do. We had to shorten them quite a bit to remove some of the weight from the stems, tie them together and shear the sides to give them a natural look. We also could see lower shrubs more clearly and did remove the rest of the snow; they rose beautifully and look just fine. The escallonia hedge by the mixed borders is also damaged and we will take the opportunity to cut them down a bit as the curator of the garden was thinking they were getting a bit too big.
The most important thing to know with shrubs and hedges that are damaged, is to know which can be cut hard and come back beautifully and which cannot. Most conifers will not, so the only thing that can be done is to carefully cut out the damage.” 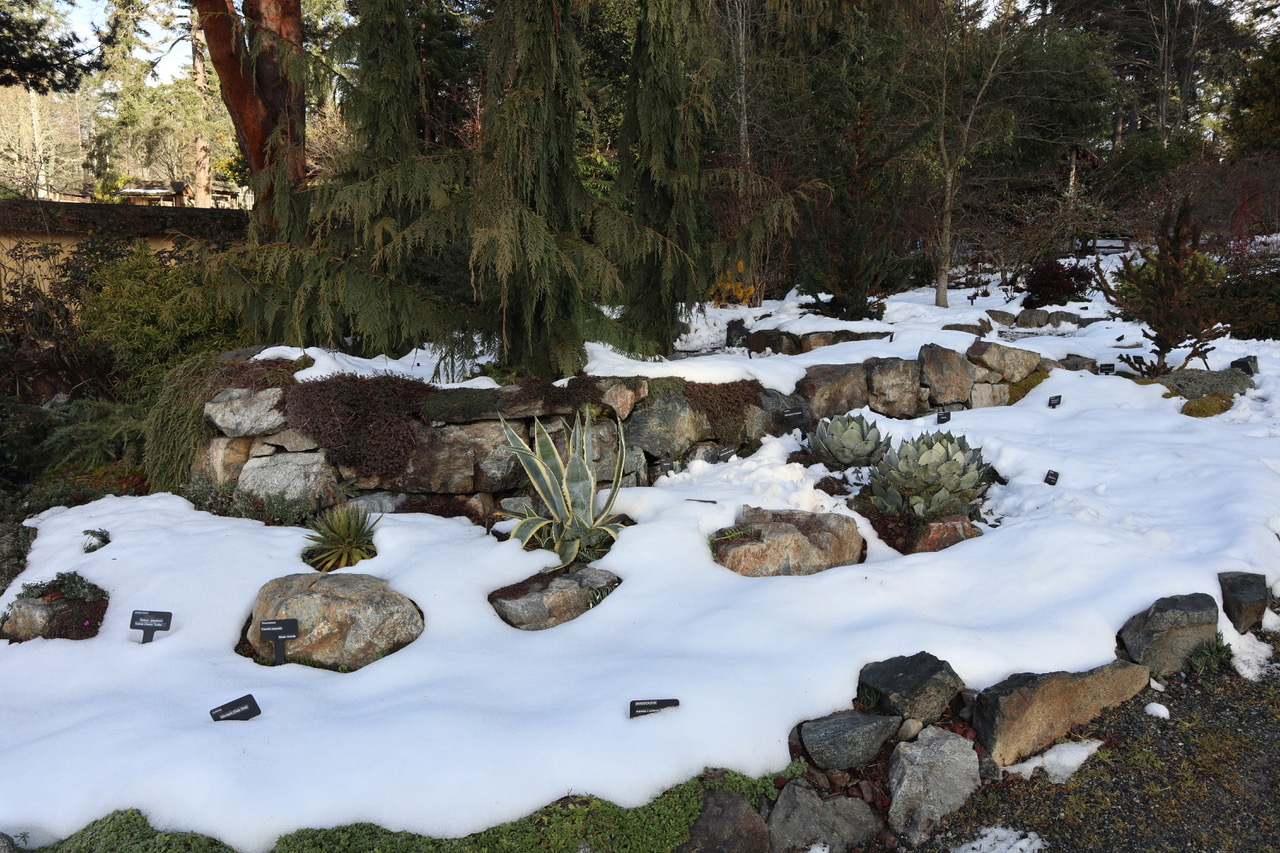 Unlike other areas in Canada, gardening is a year-round activity here and visitors to the Gardens at HCP can see beautiful blooms in the Doris Page Winter Garden. Donna Fremont, volunteer in the Winter Garden noted that “Staff and students removed large blow down in the Doris Page Winter Garden before the volunteers returned on February 20th. Linda and Giles reported that about 20 students helped in the garden to clear the paths and remove major blow down. They removed ten trailers of debris including large Douglas Fir limbs that required a chain-saw to cut into manageable pieces. Some large limbs damaged other smaller trees which needed major pruning including two Hamamelis and two ‘Sir Charles Lemon’ rhododendron. The weight of the snow on some evergreen shrubs like Loropetalum and Leycesteria required pruning. Most of the flowering stalks of the Helleborus argutifolia are broken so we have offered them as cut-flowers to other groups. It looks like the effect of the cold weather has put growth and blooming many weeks later than usual.”
We put a few questions to Giles on the gardening staff to find out a bit more about the snow damage and get a bit more advice for your home garden!

It wasn’t really as bad as it might have been. There were a lot of branches down from the Douglas Firs in the Winter Garden and in the Harvest Woods. Some big branches fell on shrubs underneath and snapped boughs and branches that we had to cut away, most specifically the witch-hazels in the Winter Garden. Furthermore, some large shrubs in other parts of the garden were flattened by the weight of snow and needed pruning hardback.  As I said in my jottings, the herbaceous plants recovered better than the woody ones, firstly because they had mostly not started to grow anyway and secondly because they can stand back up once water-pressure is restored in their cells. Woody plants are less flexible and snap when the stress is too great.
2. Was it worse than expected?
We weren’t expecting snow at all, I don’t think. So yes and no. The snow was worse but the damage was within expectations, given the quantity and duration.
3. What is the first step after assessing damage?
Being public gardens we needed to clear the branches and debris  (and snow) to allow visitors to return. Luckily we had hard-working students to do a lot of the work.
4. How does this change long-term planning?
This year evidently many plants are some weeks behind in their emergence and plant suppliers have had a lot of crop failures and it is more difficult to find plugs and plants at the same time of the year as usual.
In the long term I guess we need to expect more unpredictable winters and weather conditions so we will have to be more flexible in our approach, relying less on standard seasonal norms.
5. Does this change development and bloom times for the rest of the year?
Everything is a little delayed at the moment, but it is hard to predict how all plants will react as the year goes on. The current problem we face that will probably have the greatest influence is the lack of rain. The ground is extremely dry and we could do with several weeks of heavy rain to re-establish ground water levels.
6. Advice for home gardeners on clean-up and how to minimise damage in future.
With the unpredictability of future weather, the best advice I could offer right now is to mulch all gardens heavily. This will keep moisture in the ground and help develop strong resilient root systems, making plants better prepared for unexpected conditions that might develop.  In preparation for hard winter conditions, one can protect more tender plants by heaping them up with straw or leaves or covering them with a cloche, especially on nights when low temperatures are forecast.
https://hcp.ca/wp-content/uploads/2019/03/IMG_01641-e1566680343694.jpg 1400 1867 HCP Staff http://hcp.ca/wp-content/uploads/2021/07/logo.svg HCP Staff2019-03-22 13:17:332022-04-25 22:40:272019 Snow Damage

Of This Land
Scroll to top